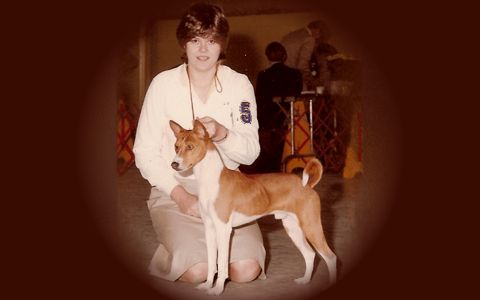 I found out that Honey wasn’t so cute as I thought she was (she was *not* a show dog) – having a foot on the front that turned in appreciably that rather threw her gait off.  Among my new friends, I met Jimmie and Jean Phillips (Bojak), Ed and Lee Strickland (Kandu) and John and JoAn Harper (Reliant) and a few others.  (JoAn really spelled it Joan but she pronounced it Jo Ann).  They all told me about upcoming litters and helped me learn to show my own beastie.  Went to the Greenville, Spartanburg, Hendersonville, Piedmont shows in late July of ’82 and nearly roasted but had fun with the new friends and did some negotiating for a new pup amongst the group.

At that time a show puppy was $350-$400 – the Reliant pup was $350, the Bojak pup was $400.  The deciding factor was that it was worth the extra $50 to not drive back up the ‘under construction’ West Virginia Turnpike to buy the Reliant pup for less $ out of pocket.

The Bojak pup “Buddy” was born in August of ’82.  Didn’t see the litter but they sent pictures.  The national was in September and I was invited to go to Florida – at the time that was MUCH too far to go.  The unnamed ladies from Charlotte went.  They came back and before their tires were cool in the driveway, called me and told me horrible things about the litter my puppy was coming from.  I was HOT.  Called and talked to Jimmie and Jean (two phones so all 3 of us could talk together).  Told them I’d gotten the info that this wonderful expensive puppy, his littermates, his mother were on death’s door with x/y/z problems.

They assured me that this information was completely without merit and took a picture of them with that day’s newspaper in the snapshot – mailed it.  I got it 4 days later and saw wiggly pretty puppies that looked to be the picture of health.  In October, I picked up that baby boy in Atlanta – wiggly, sweet thing that fit in nicely with Honey and the cocker “Lady”.  This pup came with 24x7x365 phone support, training to show him and the guarantee that he would finish his championship easily “if shown by a competent handler” (that didn’t fit me at the time – dedicated hard working newbie – that was me!).  The contract we had was a short, sweet, to the point written thing (1 page) and it was dutifully signed.  The single requirement was that Buddy couldn’t be bred to Honey – period.

Buddy was a cute thing too.  Had a rock solid topline, a loosey-goosey silly tail that wagged like a beagle’s tail when he was happy and eyes about the color of his coat (lighter than they should be).  I showed him to half of his points including a major.  He learned to chase bunnies and did a little of that…. Met Sue Campeau (Suddanly) along that time.  Jimmie or Jean showed him to the rest and we had our first champion!

During his show career, we went to the National in Leesburg VA (first one!) where we entered him (we had fun with ~400 basenjis on site) in conformation and coursing.  He actually won his class.  Actually, he was the only one that finished the day with a qualifying score and we got this pretty belt buckle Damara made.  He ran for best of breed.  (sidebar here – he, at best, was an indifferent runner – could give a fip but he didn’t interfere with others so it was not a bad thing).  The little red girl in the FCH won BOB with him coursing her dutifully around the whole course. David Kelly and Wes Shainline were huntmasters and lure op – I remember their craziness.  Am sure others were there that I should remember but am a little bit fuzzy on that.

My interesting take-home from the national is from the mass of people with dogs under the tent.  Any snarky dog that sounded off resulted in everyone raising their lead hand (like synchronized little robots) about 6” to be sure their dog was under control.  Thelma Brown judged and that’s the year Carol Webb wore a vest with a needlepoint basenji on the back (everybody was quite envious). The BOB dog was Mary Lou Kenworthy’s (Kenset) Prune.

← Accomplishments Our Basenjis - The Beginning →